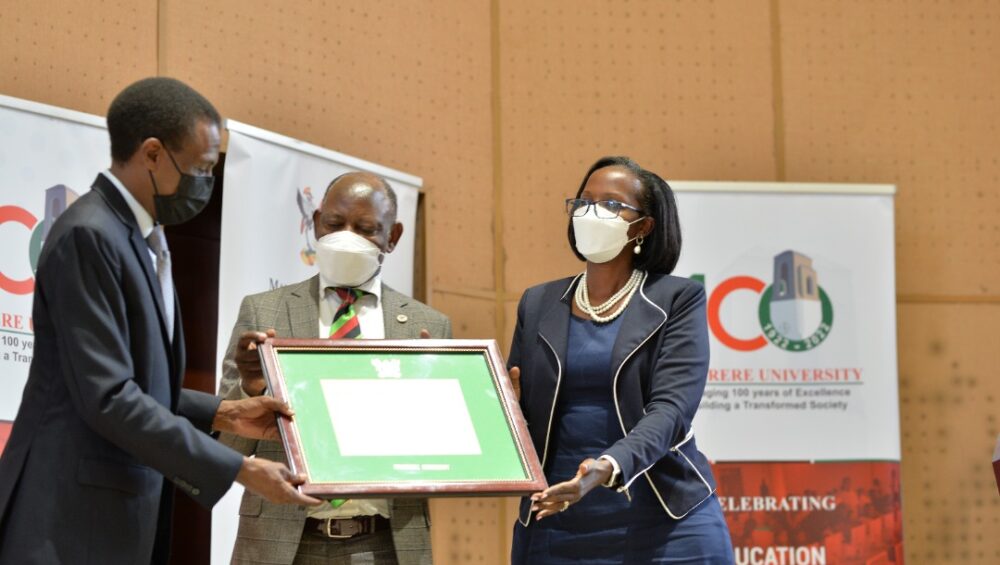 The event was held on 9th February 2022 during the inaugural #MakerereAt100 Lecture Series. The lecture, themed “A Legal Perspective on the Role of Governing Councils in the Management of Higher Education Institutions” was delivered by Hon. Kiryowa Kiwanuka.

Mrs. Lorna Magara thanked Hon. Kiryowa for accepting to deliver the lecture and share his experience having served on the Makerere University Council for four years in various capacities.

“It is a great privilege to have the Attorney General of Uganda and prominent Makerere alumnus join us to deliver the first lecture” Mrs. Lorna Magara said. “Secondly we leverage this occasion to recognise and bid farewell to two outgoing Council Members who have served the university with distinction. Hon. Kiryowa Kiwanuka served on the university council from December 2018 until October 2021. And then we are also bidding farewell to Her Worship Nyanjura who served on the University Council from July 2016 until January 2022.”

Prof. Banarbas Nawangwe thanked Her Worship for standing up for Makerere against land grabbers. “Allow me in a special way to recognise Honorable Doreen Nyanjura. Her Worship, Nyanjura has stood with Makerere in the Kampala Capital City Authority Council, (KCCA) Council to defend Makerere lane against grabbers.” he said.

Her Worship Nyanjura thanked Makerere for recognising her service on the University Council. “I want to extend my sincere gratitude to this Council and its members with whom I served. This University Council has groomed me, it has trained me and sharpened me to be a better leader.” she noted.

Hon. Kiryowa also thanked the University Council members for supporting him during his four year term. “I would like to take this opportunity to thank you for the support you gave me during my term of office as a member of the University Council of this great University. I really enjoyed the opportunity to work closely with you for the period I served in the Governing Council,” he said.

Hon. Kiryowa appreciated efforts of all Council members in propelling the University to achieving its objective of becoming a leading institution for academic excellence and innovation.  Hon Kiryowa further noted that the knowledge and experience he gained from Makerere is immeasurable.

“I continue to benefit from it in my current position as the Attorney General,” he added.

Mrs. Lorna Magara congratulated the Outgoing Council Members upon their respective appointments. “It’s been one of those bittersweet moments bidding farewell to two extremely resourceful Council Members and yet at the same time finding great joy in seeing them take on  greater responsibilities to serve our Nation and our City,” she said.